Concerned about a Child or Young Person

Safeguarding all children from harm is everyone’s business.

Most children enjoy generally safe and happy childhood experiences within their own family but unfortunately for some, this is not the case. During difficult family times everyone has a responsibility to protect children from future harm; good child care begins even before a child is born.

What is abuse and neglect?

Abuse and neglect are forms of ill-treatment of a child. Somebody may abuse or neglect a child by inflicting harm, or by not taking action to protect a child from harm. Children may be harmed at home, by people living near their home (in their community) or by an adult who is responsible for caring for them in any place away from home such as school, nursery, college, sports and leisure centres, after-school clubs, youth clubs, which is why it is really important to work together to keep children safe. Sometimes children are abused by a stranger they have met over the internet. They may also be abused by another child or children.

One in ten adults will have experienced harm during their childhood. Following are some examples of abuse and neglect:

This could be any physical injury like cuts, bruises, burns, scalds or broken bones that have not happened by accident. Injuries may be caused as a result of shaking or throwing in the case of babies. It can also be when someone deliberately induces illness in a child.

This may involve making a child feel constantly worthless or unloved, frightened or in danger. It may include not giving the child opportunities to express their views, deliberately silencing them, or making ‘fun’ of what they say or how they communicate. It may also involve seeing or hearing the ill-treatment of another. It may involve serious bullying (including cyber bullying) causing children frequently to feel frightened or in danger, or the exploitation or corruption of children.

This is when a child is made or enticed to take part in or watch sexual activities: they may be around when someone is watching pornographic material. Activities may involve physical contact, including assault such as rape or non penetrative acts such as kissing, rubbing and touching outside of clothing. It may also involve looking at, or the production of, sexual images, encouraging children to behave in sexually inappropriate ways, or grooming a child. In most cases sexual abuse is carried out by a person who is known to the child – even a member of their own family.

A child may be left alone or left with unsuitable caregivers. They may not be fed or clothed properly or not be taken to the doctors when they are unwell. Neglect also involves not protecting a child from danger.

Emergency Duty Service: (Out of Hours)

Emergency Duty Team (Out of hours)

Consultation Number for Professional use only If after speaking to your designated safeguarding lead professionals are unsure if support from Children’s Social Care is required you can consult with a social worker who will be happy to assist.

New referrals for children who meet the threshold for Level 3 and Level 4 who are not known or are currently closed to children’s services, should ideally be made by phone: 0800 13 13 126  or by using the online enquiry form, which can be found at www.staffordshire.gov.uk/firstresponse

Do I have to give my name?

No – it is your choice; if you decide that you want to remain anonymous that decision will be respected. (Professionals making a referral should be aware that they cannot be guaranteed anonymity.)

Social workers will follow up every report where they believe a child may be at risk of harm. They will talk to other people who know the child and may be able to provide a clearer picture. This includes teachers, health visitors and members of the child’s family.

After this several things could happen:

Are children taken away from home?

Very rarely – social workers cannot remove a child from their family without the permission of the court. This only happens when there are real concerns that the child will not be safe at home, and then consideration is always given to the child being looked after by a relative or a friend.

Will I be told what has happened

You should receive written confirmation that your referral has been received and acted upon unless your report was anonymous. 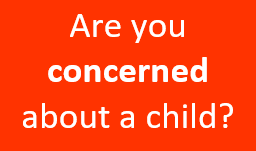 © Stoke-on-Trent and Staffordshire Safguarding Children Board 2020. Site by Phew